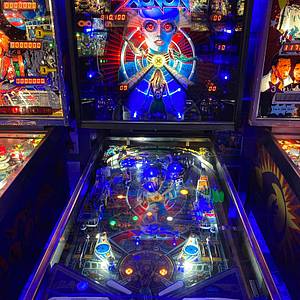 pinball: the worst day of my life

September 1980. At age 14, I moved away from home and attended the Peddie School in Hightstown, New Jersey. Peddie is a small, co-ed college preparatory "prep" school with boarding and day students, and my father graduated in 1946. Our home was about 45 minutes away, so I would sometimes see my family on weekends or when they came for swim meets. Peddie had a phenomenal swim team, one of the best independent school teams in the U.S., and I lived in Kerr Dormitory with about 50 other freshman and sophomore boys and four dorm masters.

Every weeknight and on Saturdays we had study hall from 8-10pm and stayed in our rooms with the doors open, doing homework. From 10pm to 10:30, we were free to go to the student center, where the "Canteen" (our snack bar) was open. It was the place to see and be seen, the social gathering spot for all the boarding students after study hall. There was a jukebox and two pinball machines, Silverball Mania and Xenon. Shakedown Street was the song I remember hearing most often. The Juniors and Seniors loved the Grateful Dead and jokingly referred to the song "Disco Dead".

I had a limited number of quarters to my name, but remember thinking it was much more important to play pinball than do laundry. The machines were popular. We had to wait our turn to play, and would put our quarters down on the glass to reserve our spot in the next available game. We enjoyed pinball in the Canteen for the next year, and then came the worst day of my life. It was the day they removed all the pinball machines and replaced them with video games. Xenon and Silverball Mania were out. Asteroids and Space Invaders were in. I was devastated. I never liked any of the arcade games, and even thought they were rigged. The kinetic nature of pinball was more "honest" in my opinion, but pinball was out and it sucked. I was never able to master Xenon or Silverball Mania at Peddie, but several decades later I would have another opportunity. The best days were ahead. 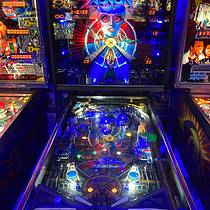 Welcome to the hobby and you can enjoy the catching up and new exploration of pinball with us here!

Sliverball Mania is an obtainable game. You shouldn't have much trouble getting that at a reasonable price. Of course, what is 'reasonable' is debatable. Xenon is a real nice game and one I'd like to own. Even so, compared to the classic 90's games, it's not overly expensive.

I just got a Xenon and hope to beat it someday.