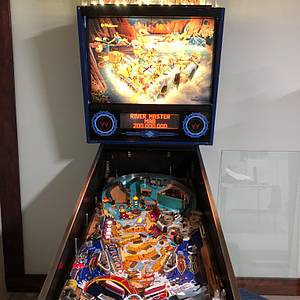 Well to start with, I grew up when if you had an Arcade or Game Room location in your town that meant that they had a pool table, a foosball tables or two, and the same with air hockey tables, and they had four or five pinball machines. Back in those days of high school, in the early 70"s,  if your Friday or Saturday night was free thst was when you headed with some buddies. Back then a game cost $ 0.25 to play. Even after high school going to an Arcade location to play pins, air hockey, etc. was a preferred weekend night with buddies if not working or not going out on a date.

While I don't recall the pins I played for the most part, there is one pin that has always stood out for me because I loved the play and the music, as well as the theme. That pin for me is the 1978 Playboy pin. I'd love to have that pin in my collection as it to me  plays great and brings back fond memories of easier and more carefree times. It's been over ten years now since I have gotten to play that pin. One of my neighbors has the pin and I keep after him every so often about letting me buy it off of him, but so far to no avail. Even this past Fall Imhit him up about buying it since in talking about his pin he admitted that he hasn't played it probably since the last time I was over and played it.

I find pins entertaining, stimulating, and fun especially during cold winter months and during this pandemic time of Covid-19. Though retired now I find that I still have enough things to do to the point that I don't get around to playing the two pins that I have. The first pin I bought was a Whitewater twenty years ago from a guy that had it out on a route in NE Ohio where it'd obviously been placed out in a bar; the cigarette smoke smell was a giveaway on that. My Whitewater being my first pin will always be a favorite not just because of being my first, but because I love the theme, the play, and of course that upper playfield with Big Foot, the diverter, and Big Foot Bluff. Two years back I spent a period of about four months disassembling WH2O, cleaning it up, and getting it back into shape to play..... but that is another story in itself to write instead of getting into here and now. My second pin was a NIB Stern 2002 Playboy thst I was fortunate enough to bid on and get off of an eBay listing back in 2010. That too has it's on story, and yes for another time.

Well that encapsulates my pinball adventure, experience, history, and love of pins to date. Well I guess I did forget to mention that at our honeymoon location that the resort had a game room in the lower section and that I introduced my new bride to pins at that time by playing an F-14 pin as I recall, and a couple of others that don't come to mind now. Pong and PacMan were fun to play when they came out, but nothing beats a great themed pin that has a great sound and play to it, all the while trying to get a great high score and not get the dreaded TILT when nudging the pin to get a silver ball in play to course correct to a flipper or pin area that you need it to go to. 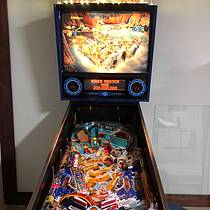 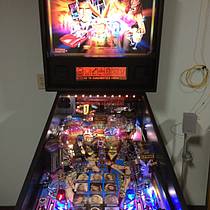 Good story you make the 70's you grew up in sound way more chill than the 90's I grew up in. I think the pinball and the arcade scene sounded a lot more romantic and close knit back then, people at ate home and went out for their entertainment unlike the exact opposite 80s and beyond. I look forward to hearing about the stories behind your two pins (I would never want to disassemble and put back together a Whitewater good on you). Good luck getting an original Playboy, I heard a lot of great stories about that one one the Silverball Podcast recently. The Playboy people were beyond laid back about how the pin turned out and apparently it premiered at the new Playboy Hotel.

I remember well when arcades became a thing - the thrill as a kid walking into the darkened space that smelled vaguely of ozone, early video games like pong, space battle, battlezone, and of course, space invaders. Pinball machines I ignored, coming of age at the same time video arcades began to blossom. Even those from the era, I never played. Decades later, when I did start collecting pins, it was a combination of artwork, the joy of playing a physical game, and the lure of repairing something - always a big draw for me. Ironic that the pinball machines I still favor today are the same ones from that golden era of pins - 1978-1982, solid state machine with unique and original themes, uncluttered playfields but with sound and sometimes even voices. No distracting DMDs, but multiball and multilevel. Games like Fathom, Centaur, Black Hole, Haunted House, Spirit, Flash Gordon, Firepower, Black Knight, Seawitch. Good times.