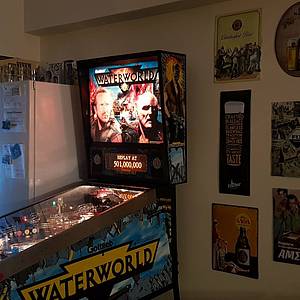 The arcade ban in Greece and how I got into pinball

As a kid, I was always fascinated by pinball machines. It was a small, different and independent world behind a glass. Same reason I always liked snow globes and ideograms. It was like reading a very good fantasy book, only with pinball you could be part of the story. Also, it had a very strong sense of mystery for me. Where the ball went when I was not able to see it, how the ball entered a target whole and showed up to another etc.? Every time I saw a pinball, I could not get enough of it. My dream was to have my own pinball in my home. Unfortunately, my parents, as almost everyone else in Greece at that time, were not into these kind of things at all, asking for a pinball it was something extremely strange to them as I was asking for a spaceship. To be honest being into those things here always came along with some loneliness. 90% of the people just couldn’t get it. In a time without internet the only way to come close to pinball machines and any related information was throughout the arcades where you could play and perhaps asked the owner few questions about it. That was the story until I was a teenager.

It was summer 2002, I was 17 years old back then, when a member of the Greek parliament was recorder gambling illegally using a hacked arcade cabin. Media could not get enough of it; it was in the news every single day. That was the reason for law 3037/2002, passed by the government, which was quite unclear and aimed at combating gambling, but in practice prohibited any use of electronic gaming in public places. Having become accustomed to irrational laws in Greece, this law really surprised us, since in our opinion hit the top. As a result, not just arcades but every single coin operated machine was considered to be illegal, including pinball. In just few months all arcades’ locations were closed and the machines were sold abroad in mass quantities. So, the industry was dead for good in Greece, never to recover again, even when in 2011 the law was canceled (It was just to late).

Without any arcades and pinballs around, enthusiasts totally lost their interest and learned to have entertainment using alternatives like home consoles and commuters etc. that were at their pick at this point. However, for people like me, romantically attached to vintage items, collections, and real games, it was not the same. Something was missing. In the meantime, I started increasing my other collections (I am collecting collectibles since I can remember my self) such us coins, stumps, books, old tools, and folklore items but as I was getting older and till today I abandoned totally all of my other collections and focused entirely on Breweriana, arcades and Pinball Machines that became my passion. But I will come to this shortly.

In 2005 when I was 20 years old, I left Greece for the United Kingdom in order to study. A great country that I loved, with very strong sense of collectibles and vintage culture. After the first few years, it was there, especially during my time in Edinburgh (2009-2010), that I became passioned with PUB’s (traditional beer houses) culture and brewing history finding out that beer was not just a drink, and I was able to find people that were also interested to that kind of things as well, and I was not alone anymore. I was able to visit numerus flea markets with tons of collectables and Breweriana in a very close distance, I was watching to the TV relevant shows that were never available in Greece and of course I found after so many years public locations that I could see, touch, and play pinball.

I returned to Greece in summer 2010 only to found a country devasted by the financial crisis that made it even harder for the small community of collectors to collect, and many people had to sell their collectables. After finished my national service to the Greek army I finally returned home in 2011 with almost nothing. I remember that I had to sell my coin collection just to get new clothes, pay overdue bills and help my father with his checks, but I do not care much about that any more. The unemployment rates were in historical heights and regardless my degrees I had to work to lousy jobs for pennies (but work was what I did with no caring what job it was. I certainly preferred that instead of just sit and wait). That was the situation until 2014 and any thoughts of dealing with collectibles were dropped out of the window for many years. In some point I started working as an outdoor sales man for a local business in my hometown, to be honest I never expected to get me anywhere, it was just another temporarily job for me. Now as I am looking back, I can honestly say that I did find my calling in sales. I was good, very good. Not long after that I was already working for a telecoms multinational company in the capital and promoted three times to the next 5 years. Left that for another company for a Product Manager position and now I am the head of exports in a company belonging to the FMCG sector. I got a large new apartment, got married and now have 2 kids that I adore. I cannot complain, life was good to me the last few years comparing to what was going on in the country. I am not rich of course but thank God with a lot of hard work and patients, I managed to create a decent and respected environment for me and most importantly for my family.

In the meantime, and as I was financially more and more capable to support it and the economy in the country went better and better, I started getting back to my hobbies. Being an old pinball enthusiast and a big fun of the movie the first thing I bought was a Waterworld pinball machine in 2018. I bought another 8 machines after that, and many of them I repaired myself, which is actually what I enjoy the most to this hobby. Besides, the only pins you can find in Greece, are projects, abandoned in old warehouse, basements etc. They are pretty much the only ones left here. At the same time, I started building my game room. I am collecting like crazy Metal and NEON Beer and Pinball/Arcade signs that I will use to decorate the walls. I mostly storing them at the moment, but I have recently found a nice space that I can use and in a few months’ time, my game room (a little dream of mine) will be finally ready.

That is my story pretty much. Thank you for reading this and if there is anything that I would like to tell you is only this.

Never give up! Never back down! Set your goals and never stop trying to achieve them. God will always be there for you as long as you are there for you self! 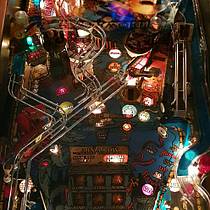 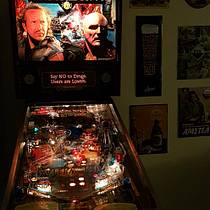 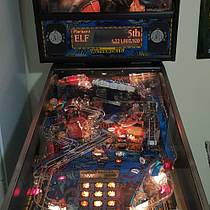 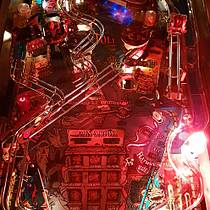 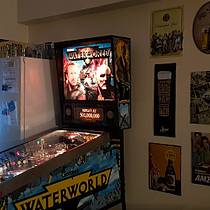 Awesome story, congratulations on your family and your success in returning to pinball. Would like to try Waterworld some day--have never seen that pinball machine before.

Thanks for the very cool story! you're right; if you work hard and be patient, God will carry you through. gratitude is everything.

Great story. Thank you from sharing! Congratulations on your success and found happiness.

Super cool story and thank you for sharing! Just goes to show that hard work, determination, and faith whatever form that may be, can still take one a long long way in life! Hope you keep enjoying your pins with your family and hope all is well!!

Great story. Thanks for sharing it.

How is it that the country that gave birth to famous philosophers and thinkers, also gave birth to illogical laws that killed pinball?

Great story, pity about the stupidity of Greek laws!! Keep living the dream, and congratulations on finding a successful life, a family you love and, of course, pinballs in your home! :-D

I enjoyed reading, thanks for sharing your story. Always cool to see pinball from a different view.

Hope things just keep getting better for you and your family.

Thank you everyone very much for your kind comments. It’s great to be part of this community and be able to share a story to people that will actually get it.

To answer to some questions that came up. The 2002 law that prohibited all electronic gaming in the country was cancelled 9 years later in 2011. However, it was to late for the industry to recover.

Now to the question of how such a stupid law was actually on, in a country like Greece that actually is one of the most democratic countries in the world; Well, let just say that is ‘’apples and oranges’’. Wrong people, to the wrong positions, at a very wrong time, unfortunately.

Great story and glad to see you are building up a nice collection. Check out people in the expat community in Greece and see if they brought any pinball machines with them that they want to sell to you :). Welcome to the community.

I can rember the days where i was working for the dutch importer of Bally/Williams in 1993/1994. They just starting to sell in large quantities pinball machines to Tsjechoslovakia and Greece since it was just allowed and/or booming in these countries...lots of nice machines went into that direction...hundreds per week...

This is true. During this period and up to the end of 90s large quantities of machines came to the country. Only a glimpse of this is now available here.

Love the story and hope the collection grows
You sound like me
Im into collecting Commodore Amiga and C64 hardware /software in a big way
Comics + much more but pinball is a strong passion!
Bravo Megale