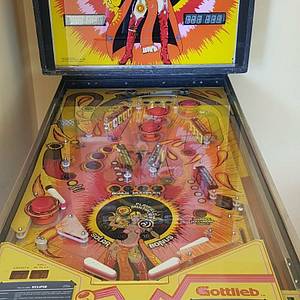 I finally got it! Eclipse Gottlieb 1982

Here is a story to be told. A story that made me really happy since I was finaly able to get an Eclipse. I know that for many people it might not be very popular however for me was the holy grail for many years.

This is the story.

Several years ago when I first started to entering the hobby I was trying to purchase my first pin. After searching on the web I found an add from a guy in Thessaloniki that was selling three projects for about 1500 dollars. One of them was the Eclipse.

After I saw the pictures I imminently falled in love with it. I wanted it so much. However he was not selling it as a single unit. So I had to get all three. No problem with that now, however back then I had no idea about restorations or how to find parts or basic knowledge on pins etc. So I decided not to buy those three projects. A decision that I regreted later on.

So the years passed buy. I got my first pin and a second one that I restored my self and a third one. So that was the time to find the guy from Thessaloniki again I said to my self. But he was no where to be found.
I tryed to call him, his number was no longer available. I tried via Viber but the contact I had back then it was no longer registered. I tryed to find the add, but the website was no longer available either.
I tryed to find him on the yellow pages because I new he had a antiques store but no luck. So that was it. The Eclipse was gone forever.

Now pay attention please. It's not easy to find pins in Greece and it's even harder or almost impossible to find an Eclipse or any other rare pin. So that Eclipse probably was the only one in the country or one of the few available. Perhaps, 3 or 4.

Any way, instead of keep trying to find the guy I started to add posts on fb that I was looking for an eclipse. In some point a person from the island of Mytilini contacted me to inform me that he got an Eclpise that he would like to sell. I said sure send me some pics.
..and now make a guess which Eclpise was at the pictures??? Yes, it was the one from Thessaloniki, the one that I did not get and it was the same pictures as back then. The guy from Mytilini was the one that actually bought the three projects from the guy in Thessaloniki.
Any way after I had a conversation with him he explained to me that he no longer had the pin. He trade it for a Gorgar and he had send the Eclpise to a person in Athens.
...and so this is where I finally found it.

The first ever pin that I wanted to buy and didn't, was after so many years mine at last!

Thank you for taking the time to read this, and if you are still looking for yours ‘’must have pinball’’, don’t stop. Keep looking! 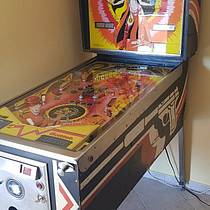 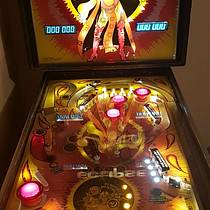 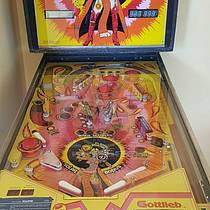 Awesome. Just got my first machine #KingKool. Terrific articles and help from users on pinside.

That is a beautiful machine. I don't think I've ever actually seen one of these. I wouldn't mind owning one of these machines one day. Despite being late to the party, Gottlieb built some spectacular SS machines early on but as we all know this creativity would not continue. Congratulations on your find!

Cool - I tried to get one at the insanity auction which shall not be named. Someday...